The attraction went into operation on June 26, 1957 and was advertised by Disneyland as "the fastest miniature train in the world." Two separate trains, designed and built as scale replicas of General Motors' futuristic Aerotrain, traveled along a figure-eight track through parts of Tomorrowland and Fantasyland. The Tomorrowland train featured cars that were named for the planets, while the cars of the Fantasyland train were named after various Disney characters.


The Viewliner was powered by a modified 1954 Oldsmobile 88 engine. It traveled on narrow gauged rails. There were two trains each with six cars. The trains were the salmon-colored Tomorrowland Viewliner and the blue Fantasyland Viewliner. 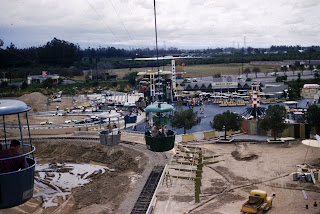 Ariel View of the Viewliner under construction.
Posted by Early Amusement Parks Of Orange County at 5:33 AM