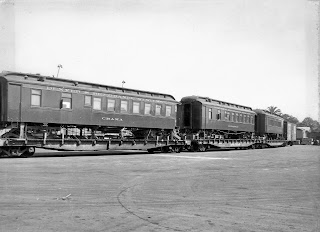 The Durango, started out life at Jackson & Sharp in 1880 as a 25-seat chair car. By 1903, it had been rebuilt as a parlor car (with mahogany interior trim) and renamed Pagosa. 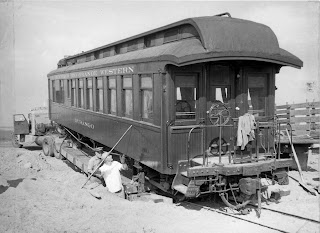 The cars were hauled to Knott’s by one of Jack Belyea’s trucks. No. 580 appears to be a heavy Sterling truck-tractor equipped with an engine-powered winch. The driver is wearing the standard uniform for truckers back in the early 50s and appears to be slowly lowering the car down the inclined trailer to the ground. Jack Belyea moved SP No. 3025 to Griffith Park and was no stranger to moving railroad equipment with his trucks and trailers. Note the railroad jack being used to steady the car as it slowly moves back down the trailer. The jack gets slid along the cribbing and prevents the car from leaning drastically towards the men in the event it derails
Posted by Early Amusement Parks Of Orange County at 5:58 AM