From the Roaring 20's Gasoline Alley added in the 1970's these cars were powered by a Briggs and Stratton engine.


The Merry Go Round auto ride in what now is called Fiesta was designed and Built by Bud Hurlbut these cars were driven by electric powered the cars were added to Knott's Berry Farm in 1958. 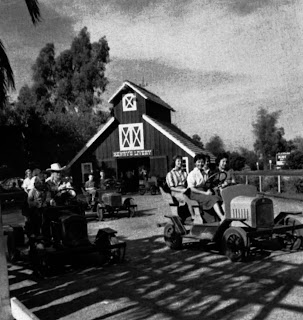 Henry's auto livery opened in July of 1957 located on the corner of Beach Blvd and Crescent Ave.Outside the main portion of the park this ride had no tracks just bumpers.The cars were gasoline powered.These cars were designed by Walter Beckman.
Posted by Early Amusement Parks Of Orange County at 9:43 PM