Walt Disney built the Carolwood Pacific Railroad on his property in Holmby Hills district of Los Angeles, California where he and his family moved in 1949. He was inspired by his animators Ward Kimball and Ollie Johnston, who already had their own backyard railroads. The railroad was named for the street on which his home was located — Carolwood Drive. Walt's 2,615 feet (797 m) of track included a 46-foot (14 m) long trestle, loops, overpasses, gradients, an elevated dirt berm, and a 90-foot(27.4 m) tunnel. All aboard Walt Disney's Railroad and Walt's passion for his trains and dream. Walt Disney's uncle, Michael Martin, had been a steam locomotive engineer. As a teenager in Missouri, Disney had a summer job selling newspapers, candy, fruit, and soda on the Atchison, Topeka, and Santa Fe Railway. Walt loved the uniform, the trains, the candy, and the chance to see the country. 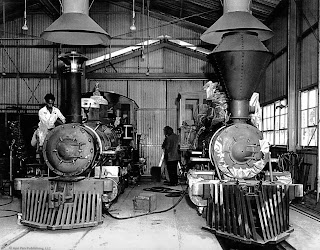 It was Disney's lifelong fascination with the railroad that in 1950 led to the building of the Carolwood Pacific Railroad (and even before that, a huge Lionel layout in a room adjacent to his office at the Studio).With his daughters and their friends happily in tow in his backyard, Disney would ride on his 1/2 mile (0.8 kilometer)-long, 1/8th scale miniature railroad. This led to Walt Disney to include the railroad as the backbone of his family-oriented Disneyland. 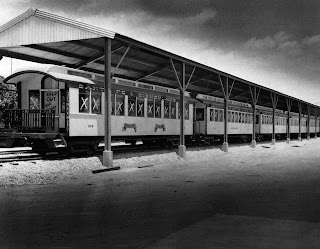 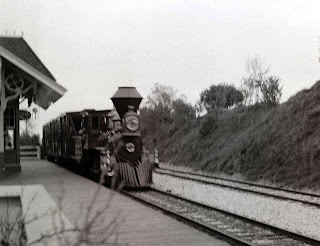 The Santa Fe and 'Disneyland's Locomotive and cars are five-eighths scale models of one of the early Santa Fe passenger trains.The SF&DRR makes a complete circle of the entire area- with virtually all seats taken on every trip. Passengers are treated to such exciting scenes as a replica of the Grand Canyon, savages in the jungles and many "wild" animals in natural habitat. The atmosphere on Main Street keynotes a leisurely pace, reminiscent of the much slower paced and more closely knit social life at the turn of the century
Posted by Early Amusement Parks Of Orange County at 9:01 AM