Knott’s Halloween Haunt saw its first year in 1973. Knott's Scary Farm has a long and interesting history, and for the most part, has been Larry Vincent was in a bit but, according to Bill Hollingshead (Entertainment Director of Knott's Berry Farm in the early 1970's) 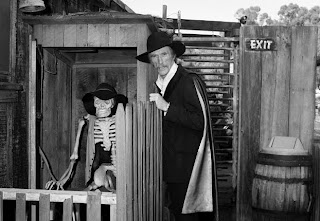 "Sinister Seymour" served as the first celebrity host of the first two big Halloween Haunt events at Knott's Berry Farm in 1973 and 1974. The photo above shows Seymour near the exit of Knott's Haunted Shack.
Posted by Early Amusement Parks Of Orange County at 5:27 AM