Starting out at the age of 12, Bell has been doing .portraits of people ever since. His operation at Knott's has become a training school for thousands of quick-sketch artists. "I've broke in more portrait artists than any other man in history," he estimates. Bell started on the Boardwalk in Atlantic City in the early 1930s with his sketch pad and pencils, and that is where he met "Lucy," the inspiration for his Cabazon monster. Lucy, as a huge elephant-like. Building was known on the Boardwalk, was used as a hotel and later a restaurant. Built in 1909, it was a local landmark.Here is Claude do a head bust of Walter Knott. 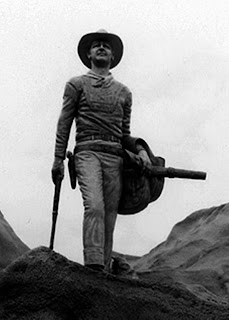 Claude Kenneth Bell is the statue maker in residence at Knoll's Berry Farm,where he made like-size statues of people like Walter Knott, John Wayne or the famed Minuteman of Lexington and Concord fame.And the prospector at Knott's Berry Farm.
Posted by Early Amusement Parks Of Orange County at 3:39 AM