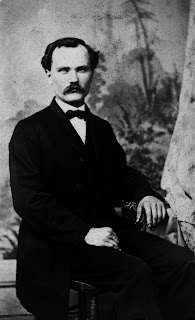 Before there was a Disneyland or a Knott’s Berry Farm The first amusement park that was located in Orange County was built by Frederich Conrad a prominent Anaheim brewer and saloon owner in the 1870s.Before Frederich started his brewing beer he had a brief business venture in the entertainment business in 1875 he bought an acre of land on the south side of Lincoln Avenue between the Southern Pacific railroad tracks and Manchester Avenue. What he was to build was a miniature Tivoli Gardens which it would be a small imitation of the famous one that is located in Copenhagen Denmark. Conrad In 1875 had bought an acre of land on Lincoln Avenue near Manchester Avenue and built his Tivoli Gardens, in 1876 making this Orange County’s first amusement park, as well as Anaheim’s first Amusement Park.Between Conrad’s new brewery and the railroad tracks he had established a park what Conrad did was planted some cypress, and pine umbrella trees. He would end up constructing a dozen or so summer houses built of lath that had resembled nurseries. Each one had contained a Table with benches many of these tables and chairs we be placed thought the park. Conrad’s attraction became a gathering place for people from miles around.The entertainment complex would consist of a bar, a dancing pavilion, a bowling alley and a shooting gallery along with a croquet court often they would hold singing competitions. Large groups would arrive from as far away as San Francisco arriving at the train Depot. This would be the birth of the Anaheim’s first amusement park Tivoli Gardens This ended up being a short lived venture for Frederich Conrad. By the time Conrad had built his amusement park. The Tivoli Gardens in Copenhagen Denmark had all ready been around thirty two years before Conrad even decided to build his.Frederich Conrad would latter on sell his Tivoli Gardens in 1921 to Anaheim Concordia Club and the thus the name was changed to Columbia Gardens.
Posted by Early Amusement Parks Of Orange County at 12:23 PM