Knott's Berry Farm becomes fenced in 1968 they start charging admission to its amusement park the cost of admission is one dollar for adults and Twenty Five cents kids. Knott’s Berry Farm officially would become an amusement park Because of its long history; Knott's becomes "America's First Theme Park. 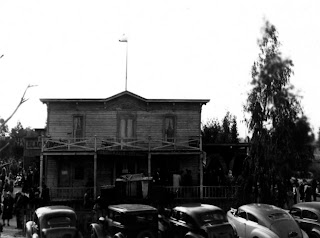 The first building that Walter bought was the Gold Trails Hotel, which had originally was constructed in Prescott, Ariz. in 1868. Adhering to its authenticity, Walter brought other buildings in from deserted ghost towns and Knott's Ghost Town as it exists today emerged.
Posted by Early Amusement Parks Of Orange County at 7:19 AM