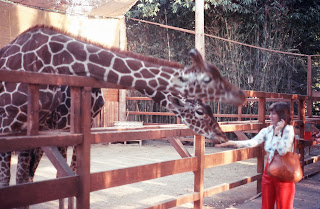 All the Animals were trained in the Heifer manner of "affection training" through "mutual love, and respect and understanding."Here and there elephants would "lie down" and "roll over" just like huge dogs, while the chimpanzees fold their hands behind their backs and walk through the park like worried executives. Ferocious-looking Bengal tigers wrestle gently with their handlers and even the dreaded black tarantula’s crawl over the bare skin of its trainer. 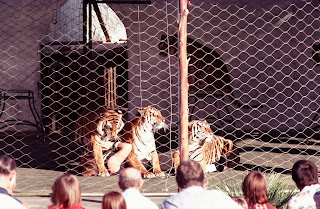 Heifer finally decided that he could display his Animals in an exhibited “intimate" surroundings than what they normally were. The result of all his hard work would end up being "Enchanted Village. 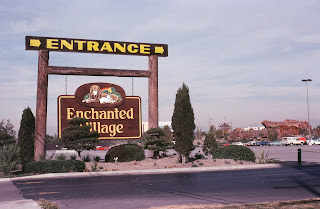 A "new" type of "theme" amusement park opened in Buena Park on June 18.It opened on the former site of the old Japanese Deer Park. This 32-acre site acre site was re -modeled and the name changed to “Enchanted Village, "located near Knott Avenue and the Santa Ana Freeway in Buena Park, where visitors will get a "close up" view of the animals. 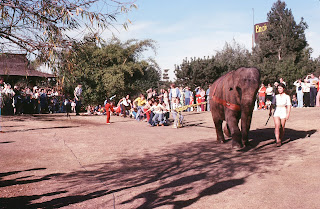 Enchanted Village, was billed as an exotic-animal reserve, They had elephants that would "lie down" and "roll over" like huge dogs, while tiny chimpanzees fold their hands behind their backs and stroll the park like worried executives.
Posted by Early Amusement Parks Of Orange County at 2:02 PM