Out Side the O.C Marineland of the Pacific. 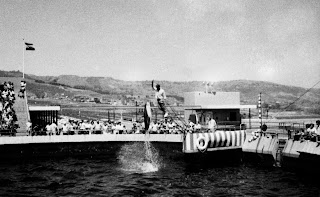 Marineland of the Pacific was the true pioneer of the oceanarium industry, and, as the largest marine park of its day, brought a vast menagerie of deep sea fish and animals before an eager public. Whales, dolphins, porpoises, seals and sea lions entertained amazed audiences, while strange sea creatures from far-away oceans inspired awe and wonder.


Marineland’s history is a story of innovation with two unique beginnings. The first opens with Robert Sherman, a Cleveland entrepreneur and businessman who manufactured high-end lobster tanks for restaurants and grocery stores. Sherman’s aquatic tanks included innovative filter technology and other features that made his tanks superior to competitive models. Sales climbed, the business grew and soon Sherman was looking to the west. He purchased Aquarium Stock Company, a Los Angeles retailer, in 1968.

Marineland of the Pacific opened in 1954.
Posted by Early Amusement Parks Of Orange County at 6:21 PM