Movie World Cars of the Stars. 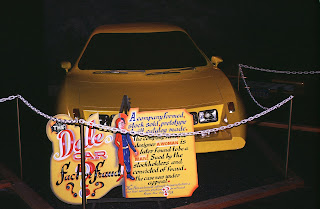 It seemed too good to be true, and yet it made America sit up with wide-eyed anticipation. The country's automotive history was set to achieve a new landmark! In November of 1974, newspapers reported the imminent launch of a two-seater car called the Dale, which would give 70 MPG and sell for $2,000! This was to be followed by a $2,450 car called the Revelle that would give 50 MPG, and an eight-seater station wagon, Vanagon, for the same amount that would deliver 40 MPG. All of these vehicles were to be three-wheelers.The company behind this was Twentieth Century Motor Car Corporation. Mystery surrounds its president Elizabeth Carmichael, 37 (in 1974), said to be widow of a NASA structural engineer, mother of five, whom newspapers reported as a 6-foot, 200-pounder who grew up on a farm in Indiana. There are also reports of Mrs. Carmichael being a transsexual, born Jerry Dean Michael. Hard to tell how all of this could be true at the same time, but the automotive tale is for real.The Dale prototype was built by Dale Clift and the project was marketed by Elizabeth Carmichael with much bravado. Speaking to reporter Dan Jedlicka of Chicago Sun-Times in November 1974, Mrs Carmichael said she was on the way to taking on General Motors or any other car manufacturer for that matter. She said she had millions of dollars in backing "from private parties", and also talked of a 150,000 sq ft assembly plant in Burbank, California. 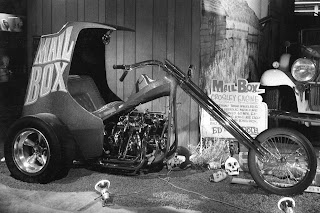 By the time this bike was completed the "Mail Box Ed was really into trikes. Ed Newton had created a trike drawing called "Mail Box" for the letters page of a special three-wheeler. Originally built by Jim "Jake" Jacobs, and traded to Ed and finished off by Ed Roth the Mail Box is powered by a Crosley four cylinder engine. 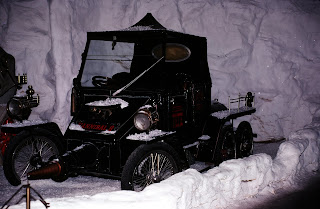 The Great Race cost a then-high $8 million to make. Unusual for a movie of the time, over $100,000 was spent building special vehicles that would be featured in most of the action scenes. Tony Curtis (Leslie Galant III) drove the Leslie Special against Jack Lemmon (Professor Fate) in the Hannibal 8. The Leslie Special, four of which were built, was a loose interpretation of the 1907 Thomas Flyer that won the real race. The Hannibal 8, one of approximately five built, was a "rocket-propelled" elevator car that was powered by a Volkswagen industrial engine. Painted the requisite black, the Hannibal 8 was driven by the movie's villain. 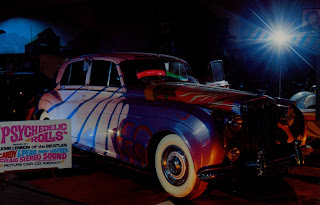 John Lennon had this custom paint applied to his car for a psychedelic effect. The paint was candy and pearl paint lustries.
Posted by Early Amusement Parks Of Orange County at 2:14 PM