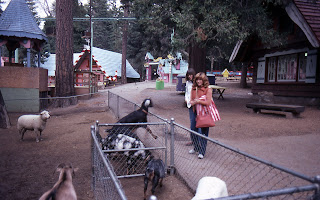 Over the years various promotions were tried, including the addition of exotic animals and local celebrity guests such as Captain Satellite, Smokey the Bear, and Romper Rooms Miss Nancy. 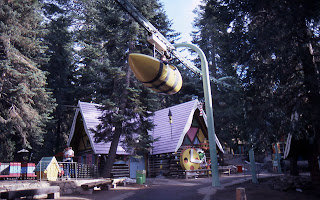 The publicity surrounding the building of Disneyland sparked ideas in many an entrepreneur’s head during the fifties. By 1955, the year Disneyland opened for business, H. Glenn Holland had already opened the first of what would become a chain of three Santa’s Village amusement parks at Lake Arrowhead in Southern California. Meanwhile, the success of a local builder’s temporary Santa’s Wonderland in Scotts Valley the winter of that same year convinced Holland that this area could support a second Santa’s Village. Acquiring the polo pony farm previously owned by golf pro Marion Hollins, Holland began plans for the park to be located on the east side of highway 17 as it passes through Scotts Valley. 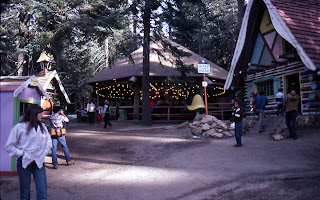 Santa’s Village opened Memorial Day of 1957 complete with winter-themed rides such as the spinning snowballs, a mirror-maze, puppet shows, a petting zoo, and of course Santa’s house complete with a refrigerated “North Pole.” All the buildings in the park featured high peaked roofs with artificial snow and icicles, even the gas station out front was adorned in this fashion.
Posted by Early Amusement Parks Of Orange County at 8:09 PM